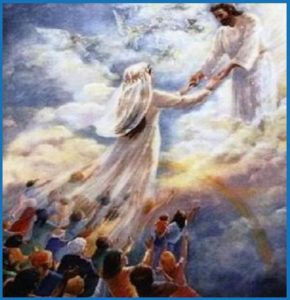 Jesus and His Bride – The Church

Heaven Ascent, the Rapture, the Second Coming, and the end-time events predicted in Revelation, as described by John in The Holy Bible, I find confusing and hard to resolve. This observation is strengthened as I peruse some of the many biblical sources of the internet. Many of the sources are associated with Christian organizations, and some are individual writers. Of course I know little to nothing about their credentials for writing. Since I have limited historical knowledge of the world and events during biblical times, no knowledge of the languages of that time, and, therefore, no translation capability, I depend on the translations of others to guide me. But, I tend to interpret the Holy Bible in a literal sense in keeping with my experience and understanding without trying to “read in” meaning not evident in the words presented. Heavenly Ascendancy is one of the first topics that I have researched and on which many writers seem to have varied interpretations. You, the readers, are left to your own understanding, I am making no attempt to influence your beliefs, I am only presenting some evidence of my pursuit to understand Biblical truths and to address and explore some questions I have.

As will be evident throughout this pursuit, my reference standard is the King James Version, Zondervan Study Bible.  This Bible is extensively accompanied by on-page commentary.  My logic for using the King James Version is that the fidelity of interpretation is best served by a version closest to the Biblical period, using the language meanings most representative of the period.  This being said, we know that there are versions earlier than the King James, but this is the more readily available, readable early version.  While referencing on-line King James Versions, and especially the other versions (NIV, etc.) I have found that changes in verse structure, modern language substitution, etc. seem to change the messages communicated.

In a previous article I have written about the belief that upon death believers go immediately to Heaven and are looking down on us. My opinion, after reviewing many Bible verses related to death, was that they are not. Central to this position is that, in my logic and literal interpretation of statements, ascending at death would require immediate judgment at death – believers to Heaven, non-believers to a different place, or both to Heaven or elsewhere.  What is the nature of the ascendancy? Is it the spirit, the soul, the body, or some combination?

7 And the Lord God formed man of the dust of the ground, and breathed into his nostrils the breath of life; and man became a living soul. (Genesis 2:7, King James Version, Zondervan Study Bible)

20Which sometimes were disobedient, when once the longsuffering of God waited in the days of Noah, while the ark was a preparing, wherein few, that is, eight souls were saved by water. (1 Peter 3:20, King James Version, Zondervan Study Bible)

23And the very God of peace sanctify you wholly; and I pray God your whole spirit and soul and body be preserved blameless unto the coming of our Lord Jesus Christ. (1 Thessalonians 5:23, King James Version, Zondervan Study Bible)

My research seems to indicate that the spirit is the same as the breath of life breathed into man, and the soul is the essence of the being – mind, emotions, and will – comprised in the body. The human being is a trinity – spirit, soul, body.

7Then shall the dust return to the earth as it was: and the spirit shall return unto God who gave it.  (Ecclesiastes 12:7, King James Version, Zondervan Study Bible)

3Consider and hear me, O LORD my God: lighten mine eyes, lest I sleep the sleep of death; (Psalms 13:3, King James Version, Zondervan Study Bible)

29Thou hidest thy face, they are troubled: thou takest away their breath, they die, and return to their dust. (Psalms 104:29, King James Version, Zondervan Study Bible)

17The dead praise not the Lord, Neither any that go down into silence. (Psalms 115:17, King James Version, Zondervan Study Bible)

4His breath goeth forth, he returneth to his earth; In that very day his thoughts perish. (Psalms 146:4, King James Version, Zondervan Study Bible)

15 Which in his times he shall shew, who is the blessed and only Potentate, the King of Kings, and Lord of lords; 16 Who only hath immortality, dwelling in the light which no man can approach unto; whom no man hath seen, nor can see: to whom be honour and power everlasting. Amen. (1 Timothy 6:15-16, King James Version, Zondervan Study Bible)

4Behold, all souls are mine; as the soul of the father, so also the soul of the son is mine: the soul that sinneth, it shall die. (Ezekiel 18:4, King James Version, Zondervan Study Bible)

It is my understanding of the above verses that the soul dies (the essence of the being), the spirit (breath of life) returns to God, and the body returns to dust.  Man is mortal and dies, awaiting his resurrection and judgement at the Second Coming.

In the book of John, Jesus tells us (2 versions):

6Jesus saith unto him, I am the way, the truth, and the life: no man cometh unto the Father, but by me. (John 14:6, King James Version, Zondervan Study Bible)

6Jesus answered, I am the way and the truth and the life. No one comes to the Father except through me. (John 14:6, New International Version, Quest Study Bible)

The promises made by Jesus in the above verses seem very straightforward to me. He says that he will come for his people (The Church) at His time (God’s time) and will pronounce judgment on both the living and the dead. He does not mention intermediate transition of His Church (Bride) to Heaven or non-believers to hell or elsewhere. This also includes the belief of the rapture, which not all Christian denominations believe, apparently. Revelation 20:13-14 does state “13And the sea gave up the dead which were in it; and death and hell delivered up the dead which were in them: and they were judged every man according to their works. 14And death and hell were cast into the lake of fire. This is the second death.” 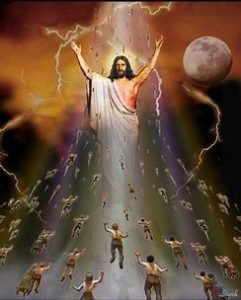 Jesus and the Rapture

It seems also, as for heaven ascent at death, pre-judgement would be required for the rapture.  And, if the dead are already in heaven or hell, why is it stated that the living will not precede the dead from the grave, assuming the truth of the rapture and an implied pre-judgement?  The belief origin was credited generally to John Nelson Darby, a 19th-century theologian. Some related common terms to help one navigate the technicalities in reading about the rapture, are the words postmillennialism, amillennialism and premillennialism. Several writers discredit the belief of the rapture.

Some verses which seem to have been used to proclaim the rapture, but in total do not seem to do so, are:

Zondervan Study Bible Notes to the above verses state that this is a proverb. Those taken away will become a feast for eagles and other birds of prey (see also Revelation 19:17-18). Apparently the above verses do not refer to the rapture. Other writers have stated that the term “rapture” does not appear anywhere in the Bible.

Another set of rapture-evidence verses quoted by other writers, but which do not seem to fit that purpose upon close reading, are:

13 But I would not have you to be ignorant, brethren, concerning them which are asleep, that ye sorrow not, even as others which have no hope. 14For if we believe that Jesus died and rose again, even so them also which sleep in Jesus will God bring with him. 15 For this we say unto you by the word of the Lord, that we which are alive and remain unto the coming of the Lord shall not prevent them which are asleep. 16 For the Lord Himself shall descend from heaven with a shout, with the voice of the archangel, and with the trump of God: And the dead in Christ shall rise first: 17Then we which are alive and remain shall be caught up together with them in the clouds, to meet the Lord in the air: and so shall we ever be with the Lord.” (1 Thessalonians 4:13-17, King James Version, Zondervan Study Bible)

The above verse does not fit the explanations I have read of the rapture in secret and of the raptured church meeting Him in the air to be with Him there forever.  This last set of verses seem more descriptive of the Second Coming as I have understood.

Perspective from a Practicing Minister

The Third Heaven: Our Real but Temporary Home

Rapture Teaching in One Seminary

There are many solid arguments for the pre-tribulational rapture, which is the view held and taught by Dallas Theological Seminary.

The Second Coming of Jesus Christ

This brings us to the Second Coming of Jesus Christ that I have believed since childhood and have had dreams of in regard to its fearsome appearance and its unexpected timing (“as a thief in the night”).

1But of the times and the seasons, brethren, ye have no need that I write unto you. 2For yourselves know perfectly that the day of the Lord so cometh as a thief in the night. 3For when they shall say, Peace and safety; then sudden destruction cometh upon them, as travail upon a woman with child; and they shall not escape. (1 Thessalonians 5:1-3, King James Version, Zondervan Study Bible)

50Now this I say, brethren, that flesh and blood cannot inherit the kingdom of God; neither doth corruption inherit incorruption. 51 Behold, I shew you a mystery; We shall not all sleep, but we shall all be changed, 52 In a moment, in the twinkling of an eye, at the last trump: for the trumpet shall sound, and the dead shall be raised incorruptible, and we shall be changed. 53 For this corruptible must put on incorruption, and this mortal must put on immortality. 54 So when this corruptible shall have put on incorruption, and this mortal shall have put on immortality, then shall be brought to pass the saying that is written, Death is swallowed up in victory. (1 Corinthians 15:50–54, King James Version, Zondervan Study Bible) 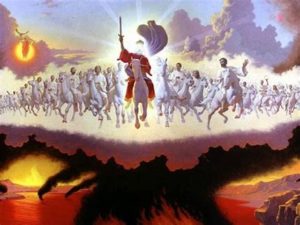 11And I saw a great white throne, and him that sat on it, from whose face the earth and the heaven fled away; and there was found no place for them. 12And I saw the dead, small and great, stand before God; and the books were opened: and another book was opened, which is the book of life: and the dead were judged out of those things which were written in the books, according to their works. 13And the sea gave up the dead which were in it; and death and hell delivered up the dead which were in them: and they were judged every man according to their works. 14And death and hell were cast into the lake of fire. This is the second death. 15And whosoever was not found written in the book of life was cast into the lake of fire. (Revelation 20:11–15, King James Version, Zondervan Study Bible)

Dallas Theological Seminary, in their course “The Story of Scripture,” week thirteen, provides a summary of events to come:

An Overview of Things to Come

As implied at the beginning, the purpose of this article has been to try and organize and validate my thoughts on Second Coming events and those that precede the Coming. I don’t feel that I have fully accomplished the goal, but I will keep searching. So should you.