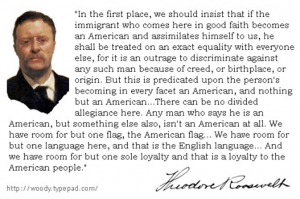 The illegal aliens – so called immigrants – flooding into the United States today should be called what they are – criminals.  They are criminals by virtue of the way they have come into the country by violation of our laws on immigration.  Those who are too young to know that they are violating our laws should get in line behind those who have followed the legal procedures of immigration.  Those who are old enough to know that they are violating the law should be barred forever from entry into the United States.  If they violate the law to come in, they will likely continue their illegal activities within the country.  The Law should also be changed to prevent children born here from automatically becoming a citizen.  Place the blame for their status of being illegals upon their parents where it belongs.  Deny all social services to the illegals (EBT cards, health insurance, etc.) and access to jobs.

The financial impact of the illegals upon the United States is immense.  The country is already heavily burdened with entitlement benefits claimed by true citizens by birth.  Some proportion of these native-born recipients cannot be blamed for their circumstances.  However, a larger and larger proportion doesn’t try to be responsible and self-supporting.  They rely on the support of the taxpayer – welfare.  This redistribution of income must be stopped.  This situation is killing the economy.  More and more of the working citizens look at the margins of their livelihood and say, “why should I get up and go to work every day, I profit no more than those that stay home?”

The problem has a military solution.  Place the military in charge of the border with the mission and authority to stop the flow of illegal aliens.  The identified criminals among them, especially those who smuggle and transport them, would be faced by the use of lethal force.  Crowd control training would allow push-back of all others attempting to cross into the US and confine them to Mexico.  The military should be stationed at the border, not 40-45 miles inward to the US.  Those who pay for the transport would also face legal penalties by denying financial aid to the source countries.  These countries would then feel pressure to prosecute those promoting the exodus of their inhabitants in this illegal manner.  The countries that allow the movement of the illegals through their territory and across their borders are aiding and abetting an invasion of the United States and should be treated as enemies of this country.  In our country, those who are found guilty of aiding and abetting a crime commission are punished. 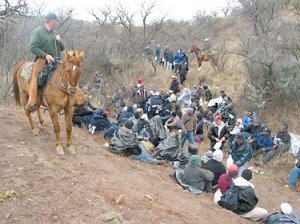